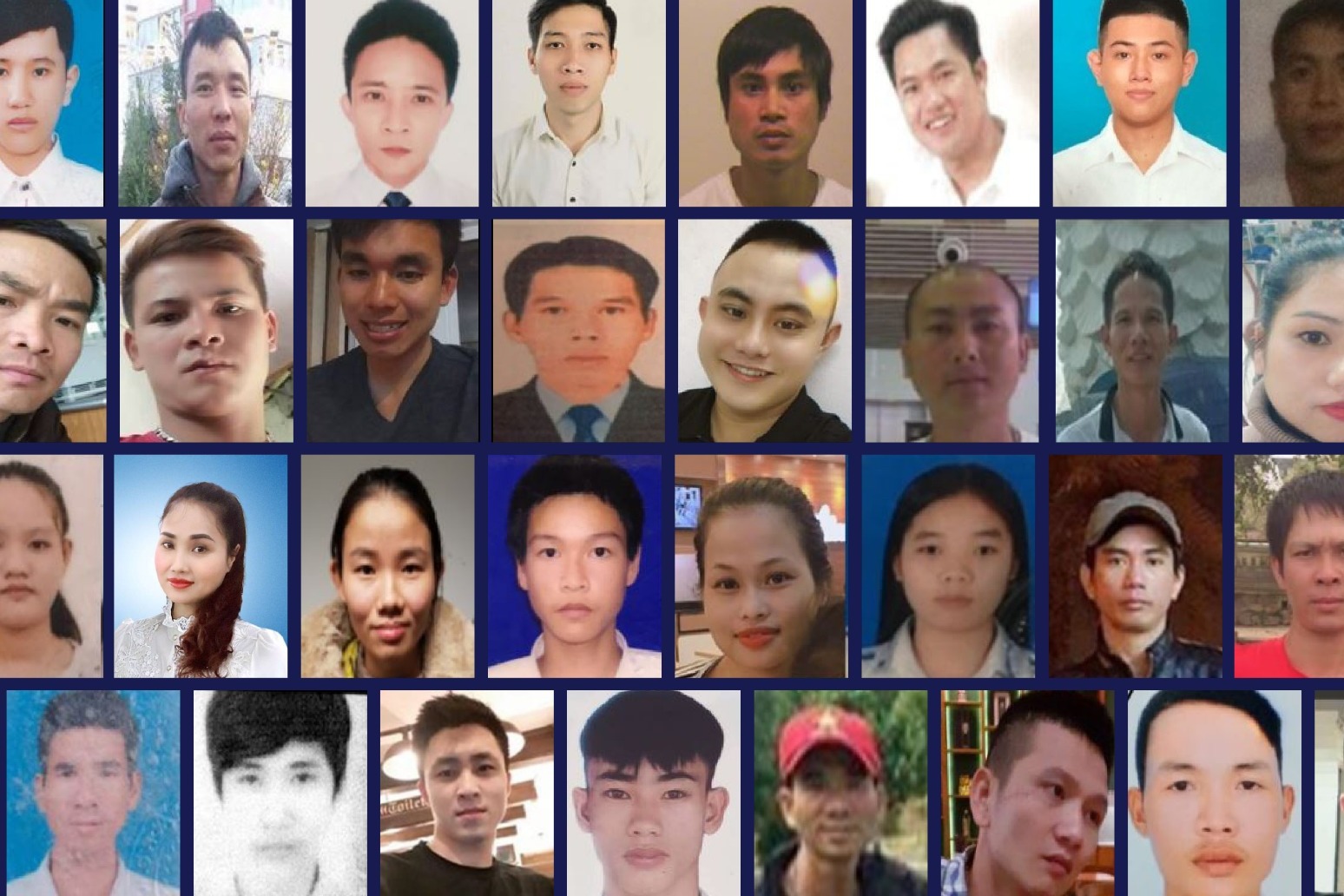 Four people smugglers have been jailed for between 13 and 27 years after 39 migrants died inside the back of a lorry.

The victims, Vietnamese men, woman and children, had hoped for a better life in Britain when they agreed to pay up to £13,000 a head for a “VIP” smuggling service – But they suffered an “excruciating” death in an airtight trailer.

On October 22 2019, they were crammed into a lorry container to be shipped from Zeebrugge to Purfleet in Essex in pitch black and sweltering conditions.

The Old Bailey heard how they desperately tried to raise the alarm as they ran out of air before reaching British shores.

The migrants, two aged just 15, were found dead by lorry driver Maurice Robinson who collected the trailer from the docks early the next morning.

Robinson, 26, of Craigavon, and his boss Ronan Hughes, 41, of Armagh, had admitted plotting to people smuggle and 39 counts of manslaughter.

Hughes’s partner in crime Gheorghe Nica, 43, of Basildon, Essex, and Eamonn Harrison, 24, of County Down, who had collected the victims on the continent, were found guilty of the offences.

On Friday, Robinson, who also admitted money laundering, was jailed for 13 years and four months in jail, Hughes was sentenced to 20 years in prison, Nica to 27 years and Harrison to 18 years.

Mr Justice Sweeney said: “I have no doubt that, as asserted by the prosecution, the conspiracy was a sophisticated, long running, and profitable one to smuggle mainly Vietnamese migrants across the channel.”

The migrants had desperately tried to break out of the trailer and raise the alarm before they suffered an “excruciatingly slow death”, the judge said.

Other members of the gang were also jailed for their role in the organised criminal operation.

Lorry driver Christopher Kennedy, 24, of County Armagh, was jailed for seven years; Valentin Calota, 38, from Birmingham, was handed four and a half years; and Alexandru-Ovidiu Hanga, 28, from Essex, was sentenced to three years in custody.

The court had heard the operation was long-running and profitable, with the smugglers standing to make more than a million pounds in October 2019 alone.

A total of seven smuggling trips were identified between May 2018 and October 23 2019, although the court heard that there were likely to have been more.

Migrants would board lorries at a remote location on the continent to be transported to Britain where they would be picked up by a fleet of smaller vehicles organised by Nica for transfer to a safe house until payment was received.

The fee was between £10,000 and £13,000, for the “VIP route” in which the driver was aware of the presence of smuggled migrants inside the trailer attached to his lorry.

Some of the trips were thwarted by border officials and residents in Orsett, Essex, who had repeatedly reported migrants being dropped off to the police.

Yet the smuggling operation was not stopped until after the tragic journey.

The families of the victims in Vietnam and Britain have spoken of their loss and hardship.

Phan Thi Thanh, 41, had sold the family home and left her son with his godmother before setting off on the ill-fated journey.

Her “heartbroken” son said: “I heard about the incident from mass media so I called dad in the UK in order to confirm if mum was a victim.

“I was very shocked, very sad and I was crying a lot.”

Tran Hai Loc and his wife Nguyen Thi Van, both 35, who were found huddled together in death, left two children aged six and four.

The children’s grandfather Tran Dinh Thanh said: “Everyday, when they come home from school they always look at the photos of their parents on the altar.

“The decease of both parents is a big loss to them.”

He said: “We were very shocked, trembled, we lost track and awareness of our surroundings.

“My wife had fainted many times whenever our son’s name was mentioned.”

Essex Police Chief Constable Ben-Julian Harrington said: “Every person in that trailer had left behind a family. They had been promised safe passage to our shores and they were lied to. They were left to die, all because of the greed of the men who have been sentenced today.”

He paid tribute to the victims’ families, saying: “They’ve kept their dignity, and they put their trust in us to deliver justice. I promised them that we would, and my teams have done just that.”

Senior investigating officer Detective Chief Inspector Daniel Stoten welcomed the sentences, saying: “I hope that the quality and the detail of the evidence, and the high level of exposure that this case has had, demonstrates that our pursuit of those involved in these wicked crimes is unrelenting.

“May this serve as a warning to those who think it’s OK to prey on the vulnerabilities of migrants and their families, transporting them in a way worse than we would transport animals. My message to you is that we will find you and we will stop you.

“Thirty-nine victims died in the trailer. Two of them were just 15 years old and had travelled half the world unaccompanied – all of them left behind families, memories, and homes, in the pursuit of a false promise of something better. Instead they died, in an unimaginable way, because of the utter greed of these criminals.”

Home Secretary Priti Patel said: “The pain and suffering endured by the families of the victims of this terrible tragedy is unbearable. They will always remain in my thoughts and prayers.

“The inhumanity of these callous people smugglers and their dangerous organised criminal networks has rightly been reflected in the sentencing today.”

Deputy director of the National Crime Agency Matthew Long said: “There can be no greater demonstration of how dangerous the organised criminal networks involved in people smuggling can be than this tragic case.

“As a result of the callousness and greed of these individuals, 39 men, women and children lost their lives in the most horrific of circumstances.”

James Bond film No Time To Die has been delayed again as Hollywood grapples with the continued disruption caused by the pandemic. Daniel Craig’s final outing as 007 will now arrive on October 8, the official Bond Twitter account announced. It had been set to be released in April this year following multiple pandemic-enforced delays. No Time To Die is the latest major release to be pushed back as Hollywood […]