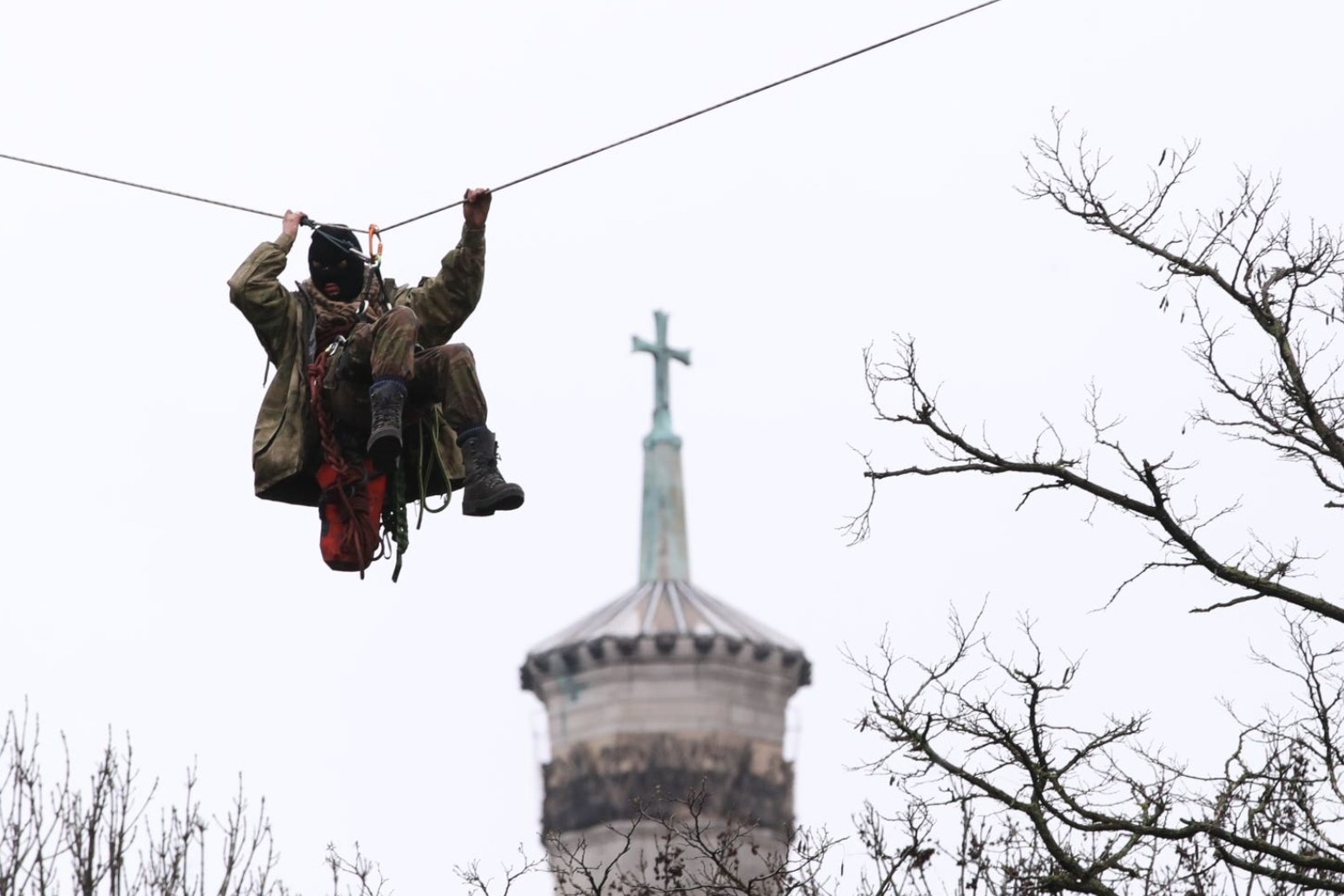 Protesters have been evicted from a central London park after they dug tunnels and set up a makeshift camp in opposition to the HS2 rail development. HS2 Rebellion activists occupied Euston Square Gardens claiming there were plans to build a temporary taxi rank over the small green space outside Euston Station.

But the group said some demonstrators were evicted shortly before 5am on Wednesday by bailiffs from the National Eviction Team.

Several protesters still remain in the area and can be seen sitting in tents, set up on wooden platforms high-up in trees, around the park.

A large, wooden makeshift camp remains in place on the south side of the green space, which is said to have been constructed over a 100ft network of tunnels.

Enforcement agents from the National Eviction Team are patrolling the park, while dozens of police officers monitor the area.

A spokeswoman for HS2 Ltd said the company could not comment on the specifics of protesters’ activities as it is yet to take possession of the land, but that “illegal” actions could be a danger to people’s safety.

A community notification issued in December detailed the need to build an “interim” taxi rank on the east side of Euston Square Gardens to support the construction of a proposed HS2 station. Construction work is due to begin this month and continue until December.

Tunnellers have worked “around the clock” using pickaxes, shovels and buckets to create the network, code-named Calvin, HS2 Rebellion said.

With the help of local residents, soil from digging has been used to “fortify the barricades” at the network’s entrance and insulate the “pallet fortress” to keep tunnellers warm as they sleep between shifts.

Tunnels are supported by wooden joists and thick boards to prevent collapse and inside there are stashes of food and water, protesters said.

HS2 Rebellion, which is an alliance of groups and individuals campaigning against the planned high-speed railway, said an “illegal eviction” of the camp began shortly before 5am on Wednesday.

It said bailiffs from HS2’s private contractor, the National Eviction Team, “entered the camp under cover of darkness” and that “tree protectors” had entered the tunnels and were “prepared for a lengthy siege”.

The group previously said they believed they “can hold out in the tunnel for several weeks and hope in this time that a court will rule against HS2 for breaking the law by attempting an eviction without a court order and during the national coronavirus lockdown”.

The group said lawyers for the Euston Square Gardens Protection Camp have written to HS2 “advising them of the illegality of any such eviction attempt at this time”.

The Metropolitan Police said officers were also at the site to prevent any breach of the peace but added any potential eviction would lie with the landowner.

HS2 Rebellion claims that the planned HS2 line, due to link up London, the Midlands, the north of England and Scotland, will see 108 ancient woodlands “destroyed” and “countless people being forced from the homes and businesses”.

HS2 Ltd said only 43 ancient woodlands will be affected by the railway’s route between London and Crewe, with 80% of their total area remaining intact.

HS2 Rebellion called on the Government to scrap the “expensive, unpopular and destructive” scheme “before it is too late” and argued for a National Citizens Assembly to “lead the way out of the climate and ecological emergency”.

One protester, Blue Sanford, 18, from London, said: “I’m angry that the Government is still effectively ignoring this crisis despite declaring a climate and ecological emergency two years ago.

“I’m in this tunnel because they are irresponsibly putting my life at risk from the climate and ecological emergency.

“They are behaving in a way that is so reckless and unsafe that I don’t feel they are giving us any option but to protest in this way to help save our own lives and the lives of all the people round the world.”

Construction work started in September on Phase 1 of HS2 from London to Birmingham.

The spokeswoman for HS2 Ltd said: “Illegal action such as this is costly to the taxpayer and a danger to the safety of the activists, HS2 staff, High Court enforcement officers and the general public, as well as putting unnecessary strain on the emergency services during the pandemic.

“Safety is our first priority when taking possession of land and removing illegal encampments.”

Andy Murray has offered advice to recreational tennis players on how to stay fit for the sport during lockdown. As an elite athlete, the Scot is still permitted to train at the National Tennis Centre but during his many spells of rehabilitation, he has spent plenty of time unable to get on court.   In a blog on trrnutrition.com, Murray wrote: “The last 12 months have been tough for tennis […]