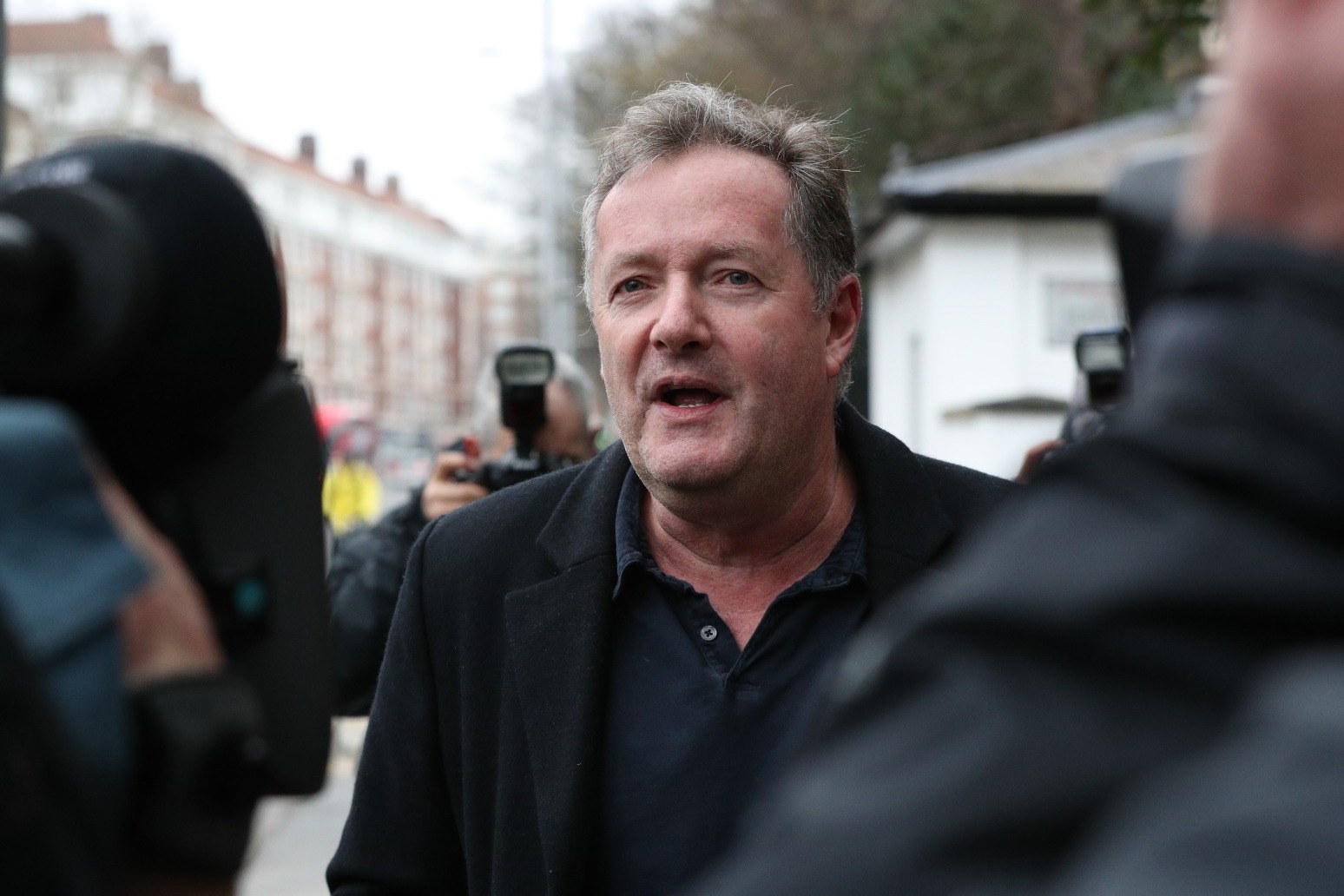 Morgan left the breakfast show after an on-air row with a colleague who criticised him for “continuing to trash” the duchess, after earlier this week saying he “didn’t believe a word” of Meghan’s Oprah Winfrey interview.

PA understands the duchess’ concern was not about the personal attacks on the validity of her racism allegation made against the royal family, or her claims she was not supported by the institution when experiencing suicidal thoughts.

The complaint is understood to focus on how Morgan’s comments may affect the issue of mental health generally and those attempting to deal with their own problems.

ITV bosses had asked Morgan to apologise to the duchess during Tuesday’s show but he refused, the Telegraph reported.

The development follows Buckingham Palace’s statement, saying that the issues raised in Harry and Meghan’s bombshell interview, especially over race, were “concerning” and would be addressed by the Queen and her family privately.

The royal family said it was taking “very seriously” the couple’s shocking allegation that a member of the family – not the Queen or Duke of Edinburgh – raised concerns about how dark their son Archie’s skin tone might be before he was born.

The royals appear to be at odds over the version of some events described by the Sussexes as the statement highlighted how “some recollections may vary”.

But the sympathetic tone of a Buckingham Palace statement suggests a reconciliation through dialogue in private is the aim.

Asked to respond to Buckingham Palace’s statement about the interview, a spokesman for the Sussexes said they would not be commenting any further.

Morgan criticised Meghan as he co-hosted Monday’s Good Morning Britain show, and after a clip aired of the duchess discussing her struggles with mental health and the monarchy’s knowledge of them, he said: “I’m sorry, I don’t believe a word she says.

“I wouldn’t believe her if she read me a weather report.”

Morgan walked off the set on Tuesday after an on-air clash with his colleague, Alex Beresford.

It said in a tweet posted earlier this week it was “disappointed and concerned to see Piers Morgan’s comments on not believing Meghan’s experiences about suicidal thoughts”.

The charity added: “It’s vital that, when people reach out for support or share their experiences of ill mental health, they are treated with dignity, respect and empathy.”

Morgan faces an Ofcom investigation after the regulator received 41,000 complaints following his comments on Monday.

Speaking from outside of his London home Morgan repeated his comments about the duchess: “If I have to fall on my sword for expressing an honestly-held opinion about Meghan Markle and that diatribe of bilge that she came out with in that interview, so be it.”

Meghan’s version of her troubled time within palace walls was defended by actress Janina Gavankar, a friend of the duchess for some 17 years.

Reacting to the palace’s statement she told ITV’s This Morning: “On one side I’m so thankful that finally they are acknowledging the experience but on the other side, I know that the family and the staff were well aware of the extent of it.

“And although their recollections may vary, theirs don’t because we lived through it with them. There are many emails and texts to support that.”

Labour MP Bell Ribeiro-Addy said Buckingham Palace needed to condemn racism, just as it had said bullying was not tolerated in the workplace when Meghan was accused of bullying royal staff.

She told BBC Radio 4’s Today programme: “The monarchy is a public institution that receives public money and any criticism of the institution should really be met with a forceful response from the institution about what they are going to do.

“We expect (that) of any institution. Why not the monarchy, why not the palace?”

The board of the Society of Editors has said it will “work towards being part of the solution” after the organisation came under fire for issuing a statement, after Meghan and Harry claimed sections of the press were racist, saying the “UK media is not bigoted”.

The body, which has almost 400 members in the UK across national, regional and local press, previously said it was “not acceptable” for the couple to make claims of racism in the press “without providing any supporting evidence”.

But in a new statement it said its previous comments “did not reflect what we all know: that there is a lot of work to be done in the media to improve diversity and inclusion”.

Labour MP Holly Lynch, who co-ordinated a letter from 72 female MPs in support of Meghan in 2019, suggested legislation may ultimately be needed to make the press take responsibility for its coverage of high-profile women.

She said MPs take freedom of the press seriously but it “comes with a responsibility to not be engaged in relentless and aggressive bullying of a woman – which is not about accountability, which is about tearing down somebody’s character for no good reason”.

Downing Street has declined to comment on the Queen’s decision to address issues raised in the Winfrey interview privately.

Detectives investigating the disappearance of Sarah Everard are searching a home and woodland in Kent following the arrest of a serving Metropolitan Police officer. The 33-year-old marketing executive vanished while walking home from a friend’s flat in south London on Wednesday March 3. Late on Tuesday, the Met Police said that a serving officer from the force had been arrested as part of the investigation, but in an unusual step […]