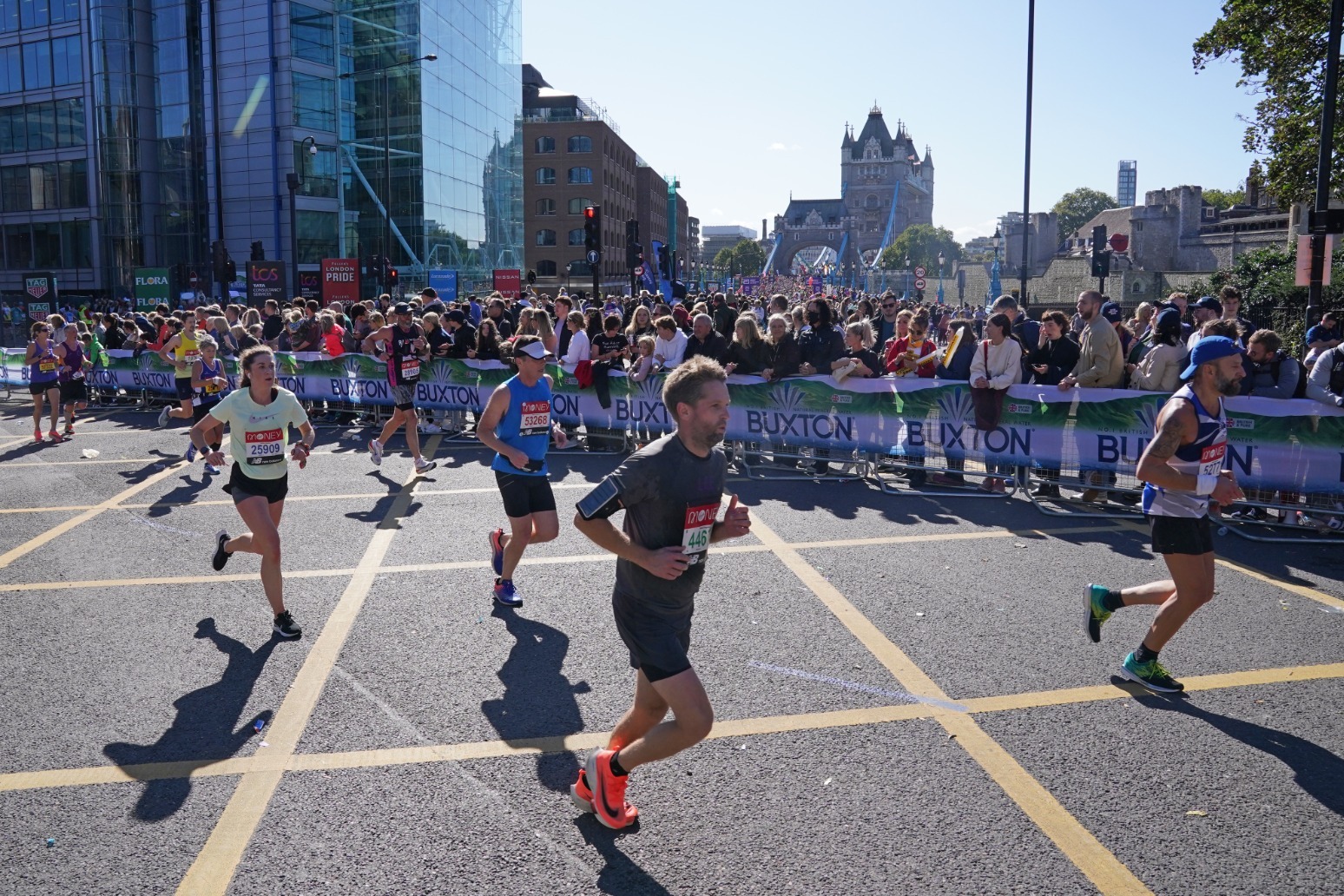 More than 40,000 runners tackled the traditional 26.2-mile route from Greenwich to The Mall

There were plenty of smiles and even some sunshine as the London Marathon returned to the streets of the capital.

More than 40,000 runners tackled the traditional 26.2-mile route from Greenwich to The Mall after last year’s race was scrapped due to coronavirus restrictions.

After Olympic BMX silver medallist Kye Whyte got the main race started, marathon organisers Virgin Money London said “so many smiles, so good to have you back!”.

It is 889 days since the colourful charity spectacular in front of cheering crowds last took place.

Swarms of fun runners donned outrageous outfits – including being dressed as a rhino, bumblebees, superheroes and a giant nurse – to help raise money for their favoured charities.

Since the race was first run in March 1981, the London Marathon Charitable Trust has awarded grants totalling in excess of £93 million to more than 1,490 projects in London and across the UK.

There was a dry start to the race which took place under cloudy skies with sunny spells and brisk winds.

Jonathan Ashworth, the shadow health secretary, earlier wished Mr Hancock who ran for his local hospice all the best, but jokingly added “obviously don’t agree with him politically but hope the run goes well (wish I was running now just so I could beat him!)”.

Scott Mitchell, the widower of Dame Barbara Windsor, ran the marathon in her memory and to support the work of Alzheimer’s Research UK.

Dame Barbara – known for her appearances in the Carry On films and as EastEnders matriarch Peggy Mitchell – died aged 83 in December 2020 after a long struggle with Alzheimer’s.

Newlywed two-time Olympic rowing champion James Cracknell, who crossed the line in just under 2 hrs 55 mins, told the BBC: “I think it is the biggest testament to what people have done over the last year.

“They have done most of their training on their own when they weren’t allowed outside. To be honest, it is one of the first times in the last year and a half when everyone has been heading in the same direction without people having different opinions.

“It really is the best about being British – people supporting their mate, partner, their charity and staying to clap everyone else.”

Formidable fundraiser Claire Lomas, who is paralysed from the chest down, said it was going to be “tough-pushing” as she took part in full motorcycling gear.

Ms Lomas, who became the first person to complete a marathon in a “bionic” suit in 2012, broke her back in a horse-riding accident in 2007 and has turned her devastating injury into a positive thing by raising thousands of pounds for charity.

There was a rush of weird and wonderful world records for the runners who took a quirky approach to the race.

Siddharth Paralkar, who completed the course in 3:50:44, is the fastest male marathon runner dressed in a safari suit while Liv Anderson, who appeared as Henry VIII, finished in 3:39:50 to be the fastest female dressed as a monarch.

Guinness World Records also said that Troi Baxter and Kerry Bullen, who clocked 3:30:08, are the fastest pair of females to run the race in handcuffs.

Sarah Dudgeon and Max Livingstone-Learmonth – who were dressed as a dog – were the fastest two-person costume at 3:17:12.

Last year’s marathon was replaced by a virtual run where participants chose their own route and a further 40,000 participants will earn their medal by taking part in the virtual event this year.

There was also no bag drop at the start and runners were instead asked to leave any belongings at the finish line at the ExCel centre when they collected their number.

There were no volunteers hanging medals around the necks of finishers, who instead found their medal in their bag.

Large groups did not wait at the start line together and instead participants set off in more than 40 waves across a 90-minute period with no official pacers this year.

Those running had to be able to show a negative lateral flow test for Covid-19.

Sisay Lemma became a first-time winner of the men’s race with an impressive run of 2:04:01 while Joyciline Jepkosgei won the women’s elite race in a time of 2:17.42.

David Weir, an eight-time winner who completed his 22nd London marathon in a row to finish third in the men’s wheelchair race, told the BBC: “It is good to be back on the old course and having a bit of crowd support.”